Herbalife in conjunction with National Breakfast Month, today announced the results of its Healthy Breakfast Survey of more than 8,000 global consumers. The survey uncovers insights into breakfast attitudes and consumption habits, which can have serious health implications for consumers. The survey findings reveal that while 95 percent of respondents acknowledge the importance of eating breakfast, nearly 50 percent don’t consume it regularly citing lack of time as a primary reason

“Whether you’re pressed for time, or you’re simply not hungry in the morning, missing breakfast is a big mistake,” said Dr. John Agwunobi, co-president, and chief health and nutrition officer, Herbalife Nutrition. “Having a balanced breakfast within 30 minutes of waking up will help boost mood, provide adequate nutrients to the brain to aid in mental alertness, energy and stave off hunger throughout the day.”

Grab-N-Go Goes Global
Of the 8,600 respondents surveyed by Herbalife Nutrition, from the U.S., China and 11 Asia Pacific (APAC) countries, more than 90 percent agreed there are significant benefits to eating breakfast daily. More than 30 percent of respondents felt they would be encouraged to eat breakfast daily if it were “ready-made” and contained necessary nutrients. Weight management was seen as a key consideration in the U.S., with weight loss named among the top three reasons for not eating a daily breakfast.

“We strive to provide consumers with better options for convenient meals that will benefit their health,” said Ibi Montesino, senior vice president, Herbalife Nutrition. “Through products like our Herbalife Nutrition Formula 1 Healthy Meal Nutritional Shake Mix, we give people a simpler path to proper nutrition with a balanced meal that’s a great option when they’re pressed for time.” 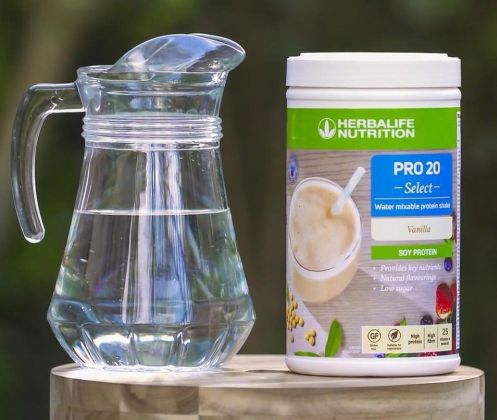 Protein Power
The survey also revealed that 42 percent of respondents recognize and understand the value of protein as an important nutrient in their breakfast. According to the Herbalife Nutrition Philosophy, the calorie intake for every meal should consist of 40 percent carbohydrates, 30 percent protein and 30 percent healthy fats, along with 25g of fiber and eight glasses of water a day to promote overall well-being.

Herbalife Nutrition Healthy Breakfast Survey Results At-A-Glance – Benefits of Consuming Breakfast
Based on the survey findings, breakfast is by far considered the most important meal of the day with 95 percent of consumers confirming breakfast is very, extremely or somewhat important to them. When asked about the benefits they can receive as a result of consuming a healthy breakfast:

The top two global responses were “gives me energy in the morning” (94 percent) and “contributes to my personal well-being” (91 percent)
The third most popular answer in China was “improves my mood” (91 percent) in comparison to “kick-starts my metabolism in the morning” in the U.S. and APAC (88 percent)
Breakfast Habits, Times and Frequency.

More than half of all survey respondents are eating breakfast seven days a week, but the percentage by region varies significantly: 55 percent in the U.S., 63 percent in APAC and 81 percent in China.

What Are Consumers Eating for Breakfast?
Regarding nutrient composition, for those in the U.S., APAC, and China who do make an effort to have breakfast, findings indicated 76 percent of respondents consumed breakfast at home. Oats or cereals are far more popular options in the U.S. (50 percent) than APAC (28 percent) or China (39 percent), while bread/toast is represented somewhat equally across the board (U.S. – 43 percent; APAC – 49 percent; China – 39 percent).

A traditional-style breakfast consisting of a bowl of rice, noodles or porridge is the most popular choice in China (63 percent) and certain APAC countries (66 percent in Thailand and 78 percent in Vietnam).

Findings further indicate lack of time as the number one reason preventing respondents from eating breakfast daily, as claimed by more than half of APAC respondents (52 percent), which is higher than both the U.S. (38 percent) and China (44 percent). The second leading factor is a lack of appetite (34 percent in the U.S. and –32 percent in both APAC and China), followed by the perception that eating breakfast is too much work in APAC (16 percent) and China (27 percent). In the U.S., 19 percent of respondents source their desire to lose weight, making it the third most popular reason not to eat breakfast daily.

Respondents in all three regions said the top factors that would encourage them to eat breakfast daily would be more time, and options that are readily accessible and convenient.

The survey was conducted between February and March of 2018 in the U.S., China, and APAC countries, including Australia, Hong Kong, Indonesia, Japan, Korea, Malaysia, Philippines, Singapore, Taiwan, Thailand, and Vietnam. More than 8,600 general population respondents participated — 1,000 in the U.S.; 2,100 in China; and more than 5,500 in APAC. The results of this survey are accurate at the 95 percent confidence level plus or minus 3.1 percentage points.

Herbalife Nutrition’s targeted nutrition, weight-management, energy and fitness and personal care products are available exclusively to and through its independent distributors in more than 90 countrie